The regatta season is upon Minerva – when we race side-by-side at river locations across the country. But one of the nicest occasions is a regatta on our home stretch – and that happened last weekend. Here’s what the crews – from novice to seasoned racers – had to say about it. 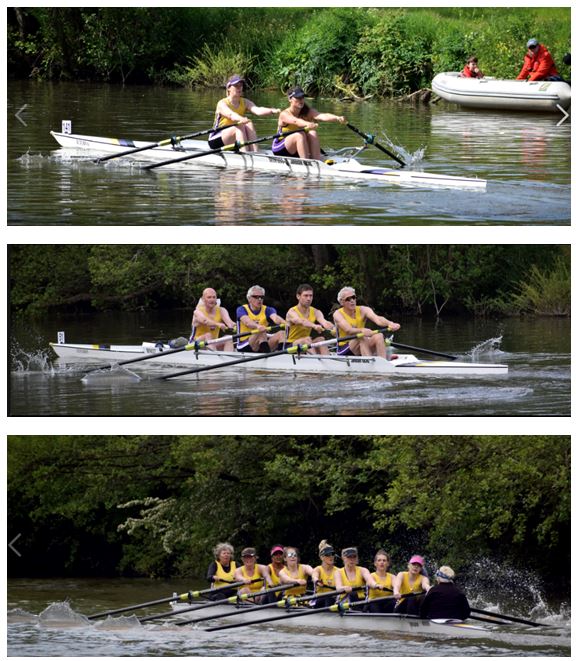 Maria and Liz – WINNERS in the double sculls!
(Did you SEE their cup?!!!)

Maria writes: “First time racing the double scull. Long day, but great fun with a fantastic double partner – looking forward to the next one.”

Liz writes: “Mad proud of Maria and how quickly her sculling has come along – she’s all in, every session, every race. I couldn’t ask for a better doubles partner.”

Heidi and Jim – WINNERS in the mixed double sculls!

Heidi writes: “Our Masters D opponents (familiar opponents from Upton) had a 7 second handicap, but we were able to steadily increase our lead across the race – and everything went to plan! We are delighted to get the first race of the season under our belts, especially after a run of injuries, which mean we have not had the training lead-up we would have preferred.”

Tim B says: “We were coxed excellently by Maggie (as always) who did a fantastic countdown and gave us some top tips, on sharp catches, legs down etc. We had a strong start. The plan was to catch up our opponents – who had a head-start of 13 seconds, which was quite a long time to wait (!) – by the halfway mark, which all went strongly to plan. My first regatta for four years and we won easily by a couple of hundred metres, so we’re delighted!”

Ruth Bolland (mum) writes: “Grace did really well for her first head to head. Nia was tough competition though and got the well deserved victory.”

These two are fast becoming a serious sculling force to be reckoned with, for Minerva. Go girls!

Jim raced in his single scull at Masters level – winning the first heat, but losing out in the final.

“It was my first single scull regatta in a very long time (27 years!), but I had a great start in the semi-final (buoyed by the earlier win with Heidi), was able to take a length over the first fifteen strokes. Ross did not give up and pushed me all the way to the finish, but I won by 1.5 lengths.”
(We can tell he got a taste for it – next time you’ll be in the final Jim!) 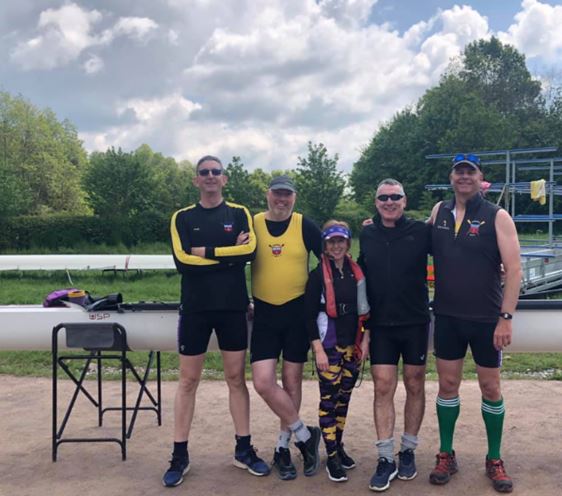 Cox Laura commented: “The guys rowed really well – the boat was shifting and we were making up our 12 sec handicap! Unfortunately a full force crab left us with a broken backstay… watch this space.”

It was Katherine Richards’ very first race on Saturday – at 4 in the Womens’ VIII. Remember your first race? I don’t think you ever forget it. I asked her for her reflections… (lovely rowing with you Katherine. We’ll have those leggings and that game face anytime) 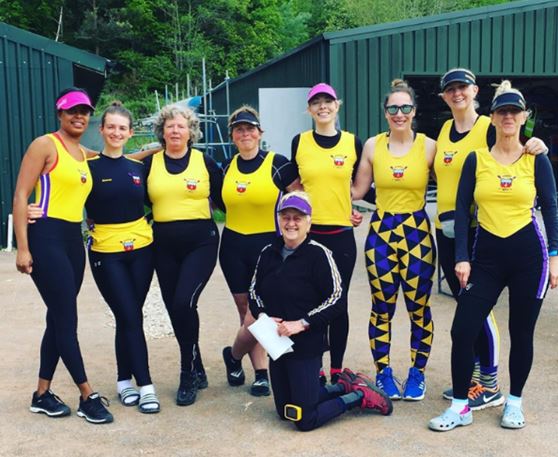 “I had that wonderful, nervous feeling as we boated – especially when we mindfully paddled up to the start -enjoying the glorious stretch of river, peaceful, just ours.

This peace was shaken by the ‘waiting to start’ part. Waiting to race was a little more ‘faffy’ than I had imagined…The excitement bubbling under as you carefully tap, hold and back down to keep your position, whilst keeping out of the way of juniors and trying not to suss out your opponents. I fidgeted a lot… Are my shoes in the right place? Are they too tight? Am I too hot? Are my new, garish leggings too slippery on the seat? Will I slide off and a catch a crab? Don’t look out of the boat they say. I tried to have confidence in my new-found rowing skills and fixed my game face on.

I started the day with the emotional thrill of not really knowing how it was going to feel to do a racing start against real-life opposition. Having only practised a few, my thoughts didn’t go past trying to remember the pattern and to keep my back straight!

Then a Novice ‘duh’ moment happened… it took me a beat too long to realise that it wasn’t our cox, Helen, calling the start. Tuning into the marshal calling ‘attention’ fried my brain! 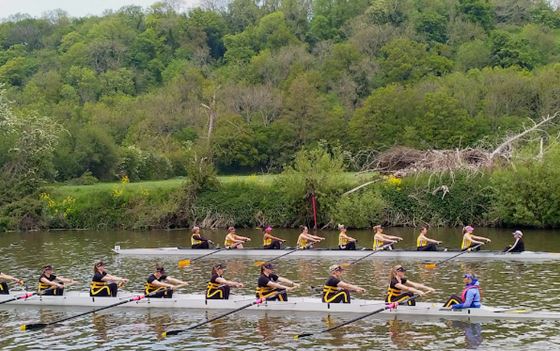 The racing start was all a bit frantic, but I tried to focus on the stroke we were on and not the stride coming up, although that all went out of the window when I sensed the other crew just edging ahead, clearly with a smoother, more controlled, powerful start to their race.

As we strode out getting into our rhythm, I could feel my body engaged, powering through. I felt like I had a lot left in the tank as we passed the 500m mark, but the opposition charged on and we couldn’t quite grasp it back.

Yes we lost, but I felt like I had won some newly-found feelings about rowing.

I’m rowing automatically. I’m putting power down. I’m rowing fully focused. I’m rowing for the joy of it with the wonderful ladies of Minerva.”

And it was Jenny Easley’s first race with Minerva, at Stroke:

“I have not been at Stroke for about two years and so to sit in the Stroke seat again for a race was TERRIFYING! I forgot how nerve-wracking it is to sit there at front stops with another crew just next you. It made it very difficult to stay calm and focus on getting a good ratio, but I was very glad to have such a supportive crew behind me!

I LOVED racing as part of Minerva! It was my first race with the Club and I did not expect to hear so much support from the bank: every few minutes I heard a “Go Minerva!” and to have had Squad Rep Kayleigh there on the bank at the start was just really lovely. I felt very supported. Looking forward to rowing again with Minerva and nailing those starts!”